The Nowa Nowa Iron Project (Five Mile Deposit) is located approximately 7km north of the township of Nowa Nowa, which is situated on the Princes Highway between Bairnsdale and Orbost in East Gippsland, Victoria.

The site is wholly within the Tara State Forest (Crown land), which is primarily managed by the Department of Environment and Primary Industries for timber harvesting. The area of the proposed mine and its immediate surrounds has been logged over the past 60 years.

The area covered by the mining licence MIN 5571 is approximately 485Ha, however, actual mining and processing operations will only cover an area of approximately 150Ha.

Further resource drilling was carried out during March 2014 to upgrade the confidence level of the existing resource estimate.

Quarter core samples were collected and assayed on a down-hole 2m basis except where obvious geological contacts were present. Samples were analysed by XRF. The resource estimate was compiled by H&S Consultants Pty Ltd (H&SC) using assay data from 16 diamond drillholes drilled by the GSV in 1955 and reported in GSV Bulletin 57, (G. Bell 1959), one diamond drillhole drilled by Gulf Mines Ltd in 2008, as well as results from nine diamond drill holes and ten reverse circulation (RC) holes drilled by Eastern Iron in 2012 and 2013. The estimate is shown below and has been reported at a lower cutoff grade of 40% Fe.

This information is extracted from the report entitled “Resource Upgrade at Nowa Nowa Iron Project” announced to the ASX on 21 May 2014.

In general terms the ore body dips at 15-30 degrees east and is bound to the west by a steeply east-dipping fault. The eastern limit has not been defined except by an increase to the depth to the top of mineralisation. Overall the body plunges to the south and is thinner to the north and thicker to the south. Some resource has been added to the south by the continuation of thick intersections such as the southernmost hole drilled in the current program, NDD016, which intersected 82m at 53% Fe. 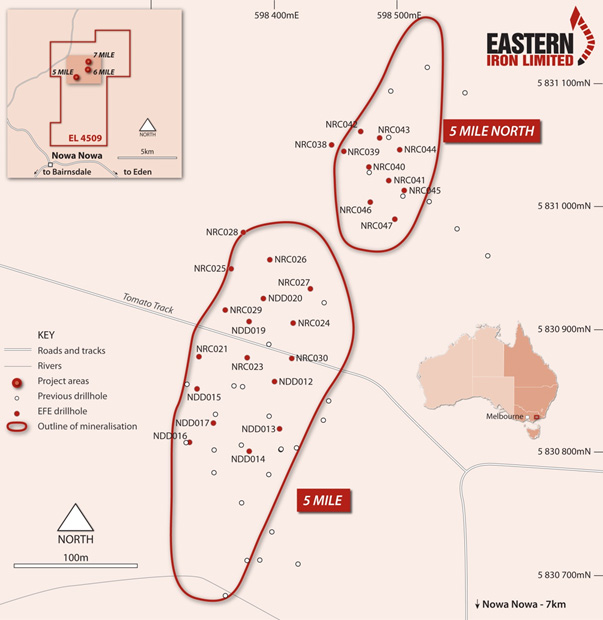 As outlined in the Feasibility Study the project involves an open cut mining operation from a single pit with dry processing at the site to upgrade the material to a saleable product.

It is anticipated that the project will produce up to 1 million tonnes of ore each year, over a mine life of 7 years. The mine will be operated using a mining contractor and local employees. There will be no onsite accommodation and no fly-in-fly-out employees.

The Feasibility Study proposed to transport the processed ore by road to the Port of Eden in Edrom, NSW. However, due to an adverse decision by South East Fibre Exporters Pty Ltd (SEFE) Eastern Iron is unable to utilise SEFE’s ship loading and wharf facilities at Two Fold Bay near Eden in southern NSW to export iron ore product from the Nowa Nowa operation. The Company has examined other potentially lower cost alternatives to transport the iron ore from Nowa Nowa to market and is examining a proposal to load iron ore concentrate slurry onto self-decanting bulk carriers in a manner similar to that undertaken by BlueScope Steel at its Taharoa iron sands operation in New Zealand.

Whilst the design may change as a result of the slurry pipeline proposal, the following outlines the main project components as currently proposed:

The mineralised body at the ‘Five Mile’ deposit occurs below younger sediments and volcanic rocks. There will be little waste rock once the overburden is removed.

The Scoping Study was based on a conventional pit where the haul ramp system spirals down to the bottom of the pit and all waste is stockpiled on external waste dumps. The DFS mining model was developed by Coffey Mining Consultants in conjunction with Woodhawk Mining Consultants. This model identified the option of accessing the ore body by means of an external box-cut, which would allow both the southern and northern sections of the pit to be mined independently. This in turn would facilitate backfill of the northern section of the pit, operated by a contract mining group. This modification reduces waste haulage distances and results in substantial savings in unit mining costs. 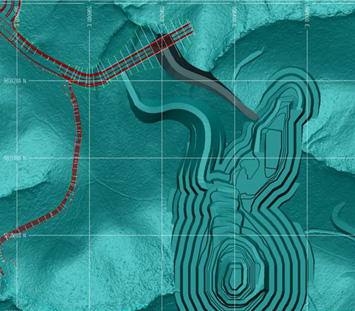 The shallow dipping almost flat, tabular attitude of the ore body allows for the use of surface miners for mining ore and waste. It is envisaged that two Wirtgen 2500 units would be supplied and operated by a contract mining group. This approach has several advantages including:

The processing plant consists of a fairly conventional two-stage gyratory crushing circuit producing a -6mm dry product feeding a rotating magnetic drum and producing a magnetic product and non-magnetic waste. The magnetic product is loaded from one of two stockpiles directly into trucks for transport to the export point. The waste product is conveyed back to the waste stockpile for storage pending disposal in the mined-out pit at the end of the mining operation.

It is proposed that mined and beneficiated iron ore would be delivered from the mine either by truck or slurry pipeline some 15km to a point close to the coast. The iron ore would then be stockpiled and during ship loading, mixed with water at a specified solid to water ratio, loaded into a slurry line and pumped offshore directly onto +100,000 tonne vessels. The bulk carrier would be attached to a single-point bottom-anchored mooring. The slurry line is secured to the sea floor and enters the vessel at the mooring point. The iron ore solids are relatively coarse with low slimes which enables the water to decant rapidly from the slurry and be returned to the shore facility for storage until the next shipment. It is estimated that the concentrate would be shipped at less than 10% moisture content.

Selected shipping operators have been involved in the study and have advised that minimal modifications would be required to existing +100,000 tonne ore-bulk-oil vessels for the purpose. The single mooring and loading point is used in the Taharoa iron sands operation in New Zealand and demonstrates that loading onto large bulk carriers can be accommodated without the need to build permanent or visible coastal infrastructure.

The major benefits of this proposal include:

Eastern Iron Chief Executive Officer, Greg De Ross commented, “The SEFE decision has provided us with the opportunity to critically examine other logistics solutions that could both secure the future of the project and significantly improve the cost profile of the Nowa Nowa operation. We are excited by the potential benefits of a slurry operation and at an FOB cost of $41.1 per tonne the project has the potential to be viable even under the current depressed market conditions but with significant leverage to a return to higher prices in the future. We will be working with our consultants over the coming months to further optimise this proposal.”

The total site-based workforce would be 52 with a potentially similar number dedicated to transport of the product depending on the transport solution adopted.

Waste material consists of the rock that lies above and around the main body of iron-rich material and the low-grade ore rejected from the magnetic separation process.

A waste rock stockpile will be developed adjacent to the open pit for the permanent disposal of appropriate waste rock.

Any potential acid forming waste rock, as well as the low-grade ore, will be temporarily stockpiled adjacent to the open pit during the life of the mine.  Any material remaining in the stockpile on mine closure will be placed in the open pit under a permanent water cover to prevent oxidation.

The project is located in the top of the Boggy Creek catchment. Boggy Creek drains into Lake Tyers approximately 15 km downstream of the mine site.

Water required for operations is limited to dust suppression and will be sourced from surface water collected on site and groundwater bores used to keep the open pit workings dry.

The mine is designed so that no waste water will leave the area associated with mining and processing during its operating life. Water runoff from the mining/processing areas will be stored in dams on site and used for dust suppression.

The impact on the Boggy Creek catchment area will be negligible.  The other creeks which feed Lake Tyers, such as Ironstone Creek, will not be affected.

Approximately 146Ha of vegetation will be cleared to facilitate the project.  Other than the open pit and access road, all areas will be revegetated on mine closure using seeds collected from within the surrounding area.

All facilities will be removed from the mine site when mining is completed.

Ground and surface water flows will slowly collect in the open pit turning it into a fresh water lake. The remainder of the cleared area (apart from an access road to the lake) will be revegetated using plants grown from seeds collected from the local area and, over time, it is expected that the vegetation will return to a similar or better state to today.

Gippsland Iron is actively investigating power supply options for the project. This includes the use of the 22 kV transmission line adjacent to the site and/or on site generation using diesel, Compressed Natural Gas (CNG) or biofuels.

Gippsland Iron has recently signed a Project Consent Deed with the Gunaikurnai Land and Waters Aboriginal Corporation (GLaWAC) for the development of the Project. The agreement recognizes the cultural and environmental significance of the area for the Gurnaikurnai people, and aims to deliver significant employment, financial and social outcomes through commercial and community development opportunities.

The project is subject to assessment under the Environmental Effects Act (1978)(EE Act) which provides the legislative framework for assessment of proposed projects that are capable of having a significant effect on the environment.

The process under the EE Act is not an approval process in its own right, rather it enables statutory decision makers (e.g. Ministers, local government and statutory authorities) to make decisions about whether a project with potentially significant environmental effects should proceed.

A referral was submitted to the Minister for Planning on the 8th November 2013 for advice as to whether an Environmental Effects Statement (EES) is required in accordance with the EE Act. On 19th December 2013, the Victorian Minister for Planning decided that Gippsland Iron (a wholly owned subsidiary of Eastern Iron) should prepare an EES under the EE Act for the project.

The EES preparation is ongoing although activities have been temporarily suspended pending a resolution of the outstanding transport issue.

Following referral to the Minister for Planning in November 2013, the Minister has determined that an Environment Effects Statement (EES) is required pursuant to the Environmental Effects Act 1978.  The EES will evaluate the physical, economic, cultural and social impacts of the project.

Gippsland Iron also referred the project to the Commonwealth Environment Minister under the Environment Protection and Biodiversity Conservation Act 1999 (EPBC Act). A delegate of the Minister determined that the project is a ‘Not Controlled Action’. Accordingly, the project is not subject to any further assessment or approvals requirements under the EPBC Act.

Gippsland Iron has already undertaken a number of technical studies regarding the potential environmental, social and economic effects of the project. These studies accompanied the EES referral and are available on the Department of Transport, Planning and Local Infrastructure website at:

A Technical Reference Group made up of representatives from relevant government agencies has been established to review studies prepared in response to the Scoping Requirements. Once comments have been addressed, a draft EES will be submitted to the Department of Planning and Transport, Planning and Local Infrastructure to assess the document’s suitability for public exhibition.

Once finalised, the EES and supporting technical studies will be exhibited to the public for a period of 30 days. Comments on the EES can be submitted during this time.

The Company has also advanced activity that will assist the timely completion of the EES, including: